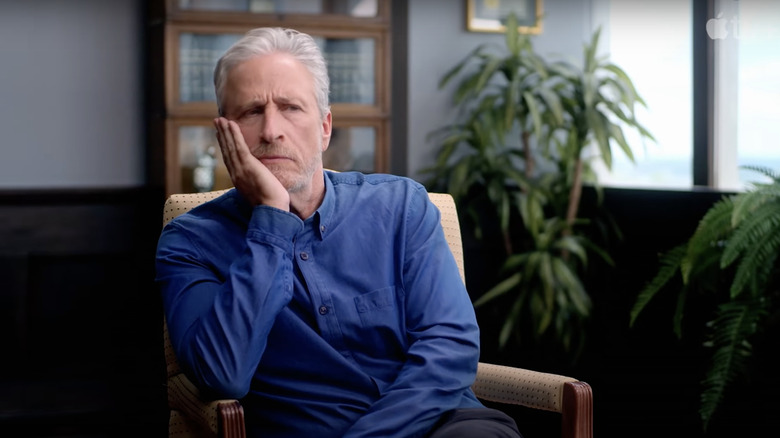 “Penalizing somebody for having a thought, I don’t think is the way to change their minds or gain understanding,” the former ‘Daily Show’ host said of Kyrie Irving being suspended from the Brooklyn Nets after promoting an anti-Jewish film on Twitter.

Stewart sincerely informed his former Daily Show colleague that he doesn’t “think censorship and fines are the way to eradicate antisemitism” in one of his signature nuanced-yet-contrarian perspectives.

Stewart rejected the idea that Chappelle “normalized antisemitism,” and said: “I don’t know if you’ve been on comments sections on most news articles, but it’s pretty fucking normal … I don’t believe that censorship and penalties are the way to end antisemitism or to not gain understanding. I don’t believe in that. I think it’s the wrong way to approach it.”

He alluded to Brooklyn Nets star Kyrie Irving’s suspension for tweeting about a film that was anti-Semitic. “I don’t think the way to change people’s ideas or develop understanding is to punish somebody for having a thought,” he stated. “We’re going to put you in a time-out, and you’re going to sit in a corner and stare at the wall until you no longer believe the Jews control the worldwide banking system,” the grown-up man said. This is something that the nation must move past. People believe that Jews own Hollywood. People believe that Jews run the banks. We will never be able to understand one another if we act as though they don’t exist and don’t deal with it head-on.

Colbert pushed back a bit, suggesting that while people may have a right to say what they want, such as comics, viewers also have a right to react and view their material however they see fit.

“Reflexively naming things antisemitism is as reductive as some of the things they might be saying,” Stewart replied. “It immediately shuts down a conversation … comedy is reductive. We play with tropes because everybody has prejudice. Comics rely on those prejudices as a shorthand for our material. Even the woke-ist of comics plays with tropes to a certain extent.”

According to Stewart, the “overall tenor of speech in this nation is to cover things up,” and scars like racial differences and antisemitism need to be exposed. Consider things from a Black viewpoint. It’s a culture that believes that many groups, including Jews and whites, have taken advantage of its prosperity. It doesn’t matter if it’s true or not; what matters is how the community feels about it. You can’t sit down and explain that being a part of an industry isn’t the same as having a nefarious and controlling interest in that industry if you don’t understand where it’s coming from.

“Dave said something in the SNL monologue that I thought was constructive as well which is: ‘It shouldn’t be this hard to talk about things,’” he added. “And that is what we’re talking about. I can’t believe there aren’t a shit ton of people who believe that the Jews have an unreasonable amount of control over the systems and they wield them as puppet masters. I’m called antisemitic because I’m against Israel’s treatment of Palestinians … those [terms] shut down debate. They’re used as a cudgel. And whether it’s comedy or discussion or anything else, if we don’t have the wherewithal to meet each other with reality, then how do we move forward?”

At this, Colbert stared at Stewart silently, and then his guest continued. “We have our own tropes,” he said. “Like: ‘A white person’s success is because of privilege. A minority’s success is empowerment. A Jew’s success — that’s a conspiracy.’ You feel that. I feel that. But I have to be able to express that to people. If I can’t say that’s bullshit and explain why, then where do we go? If we all just shut it down, then we retreat to our little corners of misinformation and its metastasis.”

Stewart put his hand on Colbert’s arm. “Does that make sense? I know you disagree with this.”

“You know what Jon? I don’t disagree with you,” Colbert replied. “I just wanted to say [echoing Chappelle’s dutifully read disclaimer at the top of his SNL monologue] — ‘I condemn antisemitism in all its forms and I stand with my friends in the Jewish community.’”

Hannah Einbinder, a comedian, offered a different perspective on the situation earlier this week when she wrote on her Instagram stories: “Yeah, the Chappelle speech was filled with antisemitism. He executed it expertly. He has a series of really good jokes. People were able to miss his repeated emphasis on conspiracy because of the laughter. No one who enjoys good humor would be willing to admit that the monologue contained antisemitism because doing so would make them responsible. “No one likes to feel horrible about themselves,” The truth is that non-Jews are less cognizant of antisemitic concepts, cliches, language, etc. Most people simply ignore these concepts entirely and only recall laughing. Dave Chappelle, as well as each and every other male comedian who believes that their amplification of bigotry is just freedom of speech, are seen as tellers of hard truths, and thus anyone who criticizes them is seen as snowflakes. I invite you to reframe this narrative. These men who pick on marginalized groups are establishment bullies reinforcing the status quo — not at all the job of a comedian. It is the people who speak out ‘against’ them who are the truth tellers.”