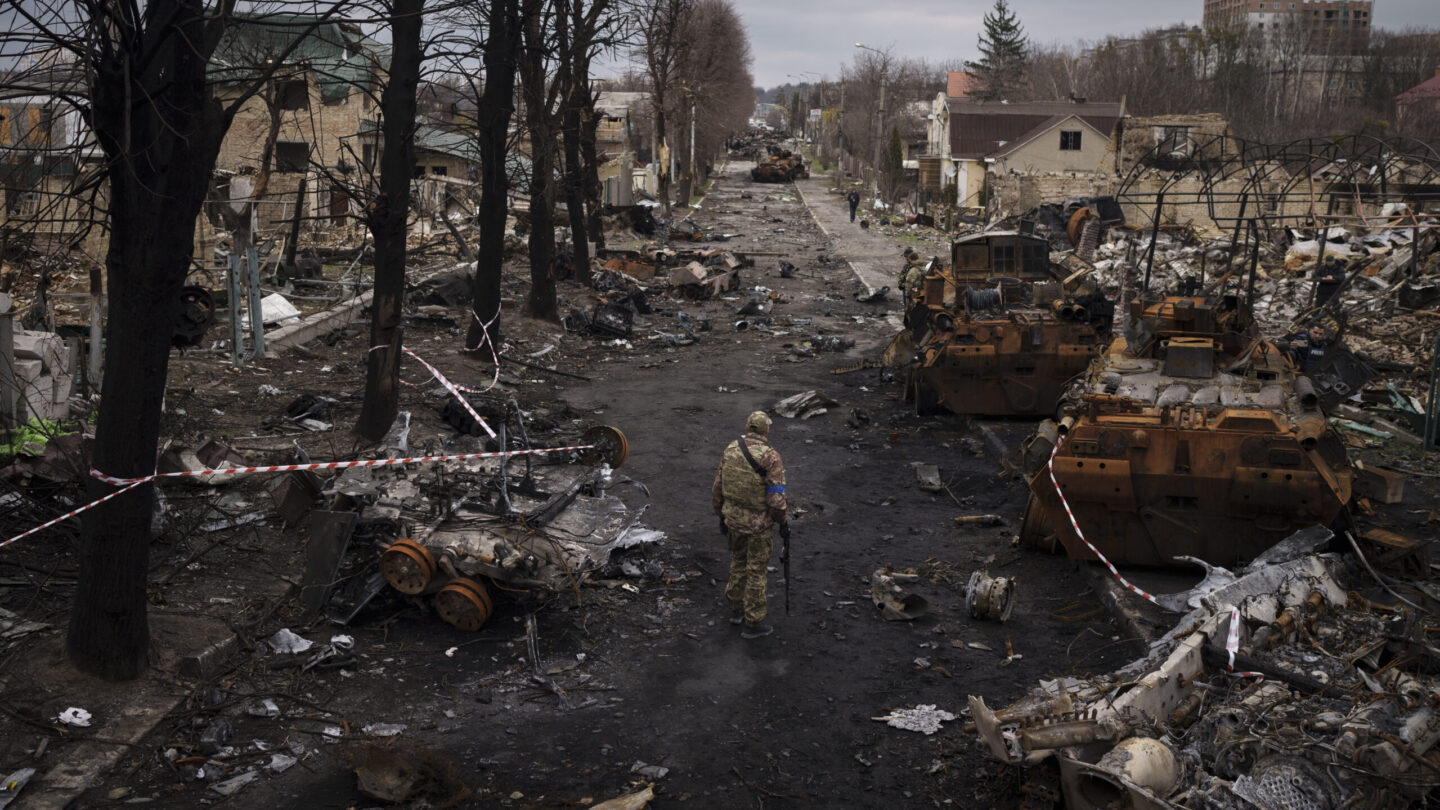 Ukrainian authorities gathered their dead and collected evidence of Russian atrocities on the ruined outskirts of Kyiv, as the two sides geared up Wednesday for what could be a climactic push by Moscow’s forces to seize the country’s industrial east.

With Western governments set to toughen sanctions against the Kremlin and send more weapons to Ukraine following allegations of gruesome war crimes by invading troops, Ukrainian President Volodymyr Zelenskyy said Russian forces were trying to push deep into Ukraine in the east, but the Ukrainian army was holding them back.

“The fate of our land and of our people is being decided. We know what we are fighting for. And we will do everything to win,” Zelenskyy said.

Ukrainian officials have stepped up calls for civilians to evacuate westward from towns near the front line ahead of the anticipated Russian offensive, and some essential services were being moved away. Local authorities in Sloviansk said postal and pension operations were clearing out and bank branches in town were shutting down.

In the scarred and silent streets of Bucha and other towns around Ukraine’s capital that Russian recently troops left, investigators sought to document what appeared to be widespread killings of civilians, some apparently shot at close range, others with their hands bound or their flesh burned. Specialists also cleared mines from the areas.

At a cemetery in Bucha, workers began to load more than 60 bodies apparently collected over the past day into a grocery shipping truck for transport to a facility for further investigation. A few of the black body bags were not fully closed. A glimpse showed the bloodied face of a young adult. Another revealed a pair of white sneakers.

More bodies were yet to be collected in Bucha, days after the Russian withdrawal. The Associated Press saw two in a house in a silent neighborhood. From time to time there was the muffled boom of workers clearing the town of unexploded ordnance, including mines.

In Andriivka, a village about 60 kilometers (40 miles) west of Kyiv, two police officers from the nearby town of Makariv came Tuesday to identify a man whose body was in a field beside tank tracks. Officers found 20 bodies in the Makariv area, Capt. Alla Pustova said.

Andriivka residents said the Russians arrived in early March and took locals’ phones. Some people were detained, then released; others met unknown fates. Some described sheltering for weeks in musty, cramped cellars normally used for storing vegetables for winter.

With the sixth week of the war drawing to a close, the soldiers were gone, and Russian armored personnel carriers, a tank and other vehicles sat destroyed on both ends of the road running through the village. Several buildings were reduced to mounds of bricks and corrugated metal. Residents struggled without heat, electricity or cooking gas.

“First we were scared, now we are hysterical,” said Valentyna Klymenko, 64. She said she, her husband and two neighbors weathered the siege by sleeping on stacks of potatoes covered with a mattress and blankets. “We didn’t cry at first. Now we are crying.”