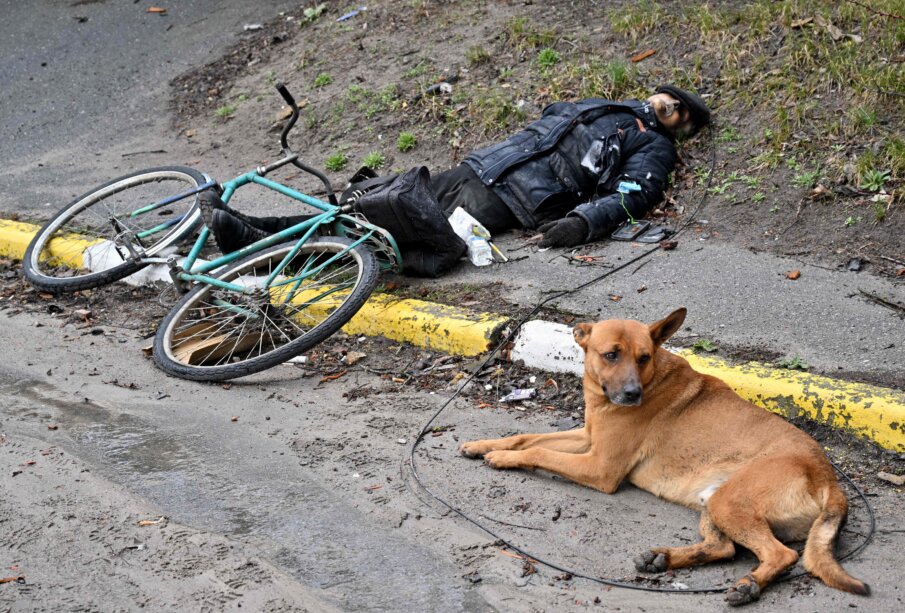 The lifeless bodies of at least 20 civilian men line a single street in the town of Bucha near the Ukrainian capital. Some lie face down on the pavement while others are collapsed on their backs, mouths open in a tragic testament to the horrors of Russian occupation.

The hands of one man are tied behind his back with a piece of white cloth. Another man lies alone, tangled up in a bicycle by a grassy bank. A third man lies in the middle of the road, near the charred remains of a burned-out car.The shocking images of the carnage in Bucha were captured by Agence France-Presse on Saturday, the same day Ukraine declared the town liberated from Russian troops. Accounts of alleged Russian atrocities are emerging as its forces retreat from areas near Kyiv following a failed bid to encircle the capital.

The town of Bucha has endured five weeks of near-constant firefights. Now officials and human rights groups are blaming the civilian deaths on the departed Russian forces.

“Corpses of executed people still line the Yabluska street in Bucha. Their hands are tied behind their backs with white ‘civilian’ rags, they were shot in the back of their heads. So you can imagine what kind of lawlessness they perpetrated here,” Bucha mayor Anatoliy Fedoruk told Reuters on Saturday.

In a video address Sunday after the reports out of Bucha, Ukrainian President Volodymyr Zelensky called for an end of Russian “war crimes.”

“The world has already seen many war crimes. At different times. On different continents. But it is time to do everything possible to make the war crimes of the Russian military the last manifestation of such evil on earth,” he said.

Zelensky called on Russian leaders to be held accountable for the actions of the nation’s military.

“I want all the leaders of the Russian Federation to see how their orders are being fulfilled. Such orders. Such a fulfillment. And joint responsibility. For these murders, for these tortures, for these arms torn off by explosions that lie on the streets. For shots in the back of the head of tied people. This is how the Russian state will now be perceived. This is your image,” Zelensky said.

The alleged atrocities in Bucha have drawn international outrage, with Western leaders, including US Secretary of State Antony Blinken, calling for war crimes investigations and increasing sanctions on Russia.

CNN has not been able to independently confirm the details around the men’s deaths.

In his address, Zelensky announced a “mechanism of justice” would be established to investigate crimes committed by Russian soldiers in Ukrainian territory. The mechanism would be supported by the Ministry of Foreign Affairs, the Prosecutor General’s Office, the National Police, the Security Service, the Intelligence Service and other government branches, he said.

“This mechanism will help Ukraine and the world bring to concrete justice those who unleashed or in any way participated in this terrible war against the Ukrainian people and in crimes against our people,” he said.

Zelensky said he will provide more information on the state of Ukrainian territory that was occupied by Russian forces.

“All partners of Ukraine will be informed in detail about what happened in the temporarily occupied territory of our state. War crimes in Bucha and other cities during the Russian occupation will also be considered by the (United Nations) Security Council on Tuesday,” he said.

He also noted that efforts are underway to restore electricity and water to Bucha, as well as reestablishing medical institutions and infrastructure.

Zelensky once again invoked the need for stronger sanctions against Russia.

“There will definitely be a new package of sanctions against Russia. But I’m sure that’s not enough. More conclusions are needed. Not only about Russia, but also about the political behavior that actually allowed this evil to come to our land,” he said.

Asked during an appearance earlier Sunday on CBS’ “Face the Nation” if Russia was carrying out genocide in his country, Zelensky said: “Indeed. This is genocide.”

“The elimination of the whole nation, and the people. We are the citizens of Ukraine. We have more than 100 nationalities. This is about the destruction and extermination of all these nationalities,” he said.

The Russian Ministry of Defense has claimed the extensive footage of Bucha was “fake,” saying “not a single local resident suffered from any violent actions” during Russia’s occupation of the city. “In the settlements of the Kiev region, Russian military personnel delivered and issued 452 tons of humanitarian aid to civilians,” it said in a statement.

A separate statement claimed the footage was staged. “Stories about Bucha appeared in several foreign media outlets at once, which looks like a planned media campaign,” the statement said. “Taking into account that the troops left the city on March 30, where was the footage for four days? Their absence only confirms the fake.”

The Russian government has consistently responded to allegations of civilian casualties inflicted by Russian forces with blanket denials. After the Russian air force bombed a maternity hospital on March 9, Russian officials attempted to cast doubt on widespread media reports, with one Russian diplomat accusing a victim of the bombing — a woman who escaped from the bombing, bloodied and still pregnant — of being an actor and not a real victim.