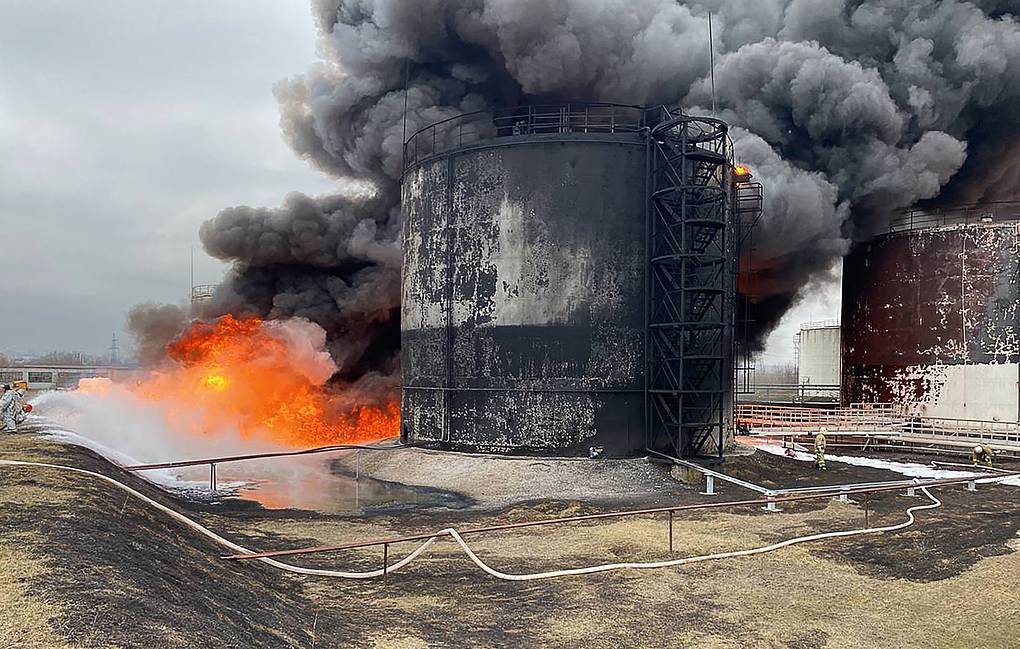 An oil storage depot is on fire in a Russian city just north of Ukraine after what the local governor said was an attack by two Ukrainian helicopters.

A video shared on Twitter shows a blaze near apartment blocks in Belgorod, some 40km (25 miles) from the border.

Some clips appear to show rockets hitting the oil depot.

However, Ukrainian aircraft have not struck targets in Russia previously. Governor Vyacheslav Gladkov’s claim was not confirmed by Ukrainian officials.

President Vladimir Putin’s spokesman also blamed Ukraine for the fire and said the incident “cannot be perceived as creating comfortable conditions for continuing the talks” with Kyiv. So far those peace talks have made little progress.

Russian authorities were doing everything to reorganise the fuel supply chain and avoid disruption of energy supplies in Belgorod, spokesman Dmitry Peskov, said.

The city of 370,000 lies just north of Ukraine’s second city Kharkiv, which has been heavily shelled by Russian artillery and remains surrounded by Russian forces.

Governor Gladkov said in a Telegram message “there was a fire at the oil depot because of an air strike carried out by two Ukrainian army helicopters, which entered Russian territory at low altitude”. “Nobody was killed,” he added.

He said emergency workers were trying to contain the fire as quickly as possible and that there was “no threat” to residents. The emergencies ministry posted video of the blaze on Telegram.

Russia’s Interfax news agency reported that residents nearby were evacuated and two people were injured at the depot. It said eight fuel tanks were on fire and nearly 200 firefighters were on the scene. The depot is run by Russian state oil firm Rosneft.

Russia’s RIA Novosti news agency says the blaze in three of the tanks has been extinguished, but there is still a risk of the fire spreading.

On 29 March several explosions were reported at an ammunition depot near Belgorod.