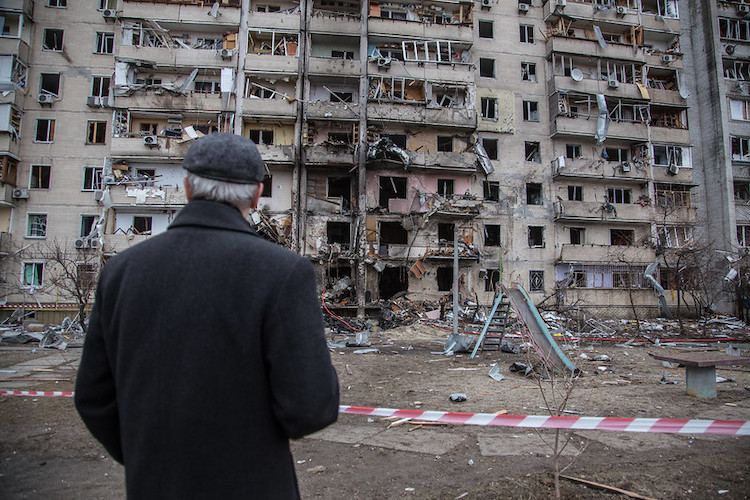 Vladimir Putin is not a geopolitical grandmaster. Rather than restoring Russia’s greatness, the Kremlin’s invasion of Ukraine has made the Russian state poorer, weaker, more isolated, and less secure. Western sanctions imposed in response to the Kremlin’s unprovoked aggression have already sent the ruble’s exchange value tumbling and have caused Goldman Sachs to downgrade its annual forecast for Russia from a 2-percent growth to a 10-percent drop. Professional class Russians are fleeing the country en masse, even as the Kremlin elite is prevented by sanctions from following them. Additional NATO troops are deploying in order to reinforce the alliance’s eastern flank. European countries are upping their defense budgets. Sweden and Finland are seriously reconsidering their officially neutral statuses. Any remaining pro-Russian sentiment in Ukrainian society has been bombed into oblivion. In under a month, Russia has transformed itself from a problematic-yet-acceptable country into an international pariah.

Shockingly, this turn of events seems to have genuinely surprised the Kremlin leadership. By every indication, the men put in charge of planning Russia’s “special military operation” genuinely believed that Russian paratroopers would be greeted as liberators in cities such as Kharkiv, Kyiv, Kherson, and Odesa. Despite an overwhelming advantage in firepower, the Russian army’s initial invasion strategy involved sending paratrooper units forward without sufficient armored protection, as if the presence of Russian special forces would inspire no resistance from their Ukrainian counterparts. It was only after several such columns of Russian advance troops were destroyed that the Russian army finally began using the full force of its technological advantages, both against Ukrainian military targets and against Ukrainian civilians.

The response of Ukrainian society offers a second example of a surprise that should not have come as such. Kyiv, Kharkiv, Mykolaiv, and Odesa might have been Russian cities at some point in history, but there was never any indication that their populations were awaiting “liberation” from Volodymir Zelensky, their legitimately elected Russophone president. The fact that decision-makers in Moscow were unaware of this ought to serve as a warning about what other catastrophic miscalculations the Kremlin leadership might yet make over the course of this developing conflict.

Judging from the Kremlin’s domestic messaging, there is little hope that a diplomatic solution will be found any time soon. Despite some cautious public signaling from the negotiating teams of both sides that a written agreement might be reached in the coming weeks, the loudest forms of rhetoric coming out of Moscow remain unchanged.

Putin is calling Russian dissidents “scum and traitors” who need to be “spit out like a fly that accidentally flew into one’s mouth.” Ministry of Foreign Affairs spokeswoman Maria Zakharova is blaming the Russian bombing of a theater-turned-shelter in Mariupol on Ukrainian “nationalist battalions” who “gathered people into the theater and then turned them into victims.” She went on to say that “neo-Nazis” consider such methods “to be normal, to be justified … they see no difference between civilians and soldiers.” Vladimir Medinsky, the head of Russia’s negotiating team, continues to express frustration at Ukraine’s purported failure to “pay attention to the work of the Nazi military formations allowed in Ukraine, to their symbols, to their training, to their ideology.” In short, anyone claiming to sense a positive shift in Russian rhetoric is not paying attention to the language that the Kremlin uses when communicating with Russians themselves.

Abstractly, of course, it would be preferable if some sort of face-saving off ramp could be found in order to bring an immediate, peaceful end to the conflict. However, Russia’s escalated targeting of civilian infrastructure in Mariupol, Kharkiv, Kyiv, Chernihiv, and Mykolaiv demonstrates that the Kremlin has already passed any reasonable point of no return. Even if officials in Kyiv, Brussels, and Washington were to offer the Kremlin elite assurances that their personal safety and freedom would be guaranteed following any negotiated Russian withdrawal from Ukraine, there is simply no possibility of returning to the pre-invasion status quo.

The consolidation of the Kremlin elite’s rhetoric around the “de-nazification” of Ukraine seems to confirm that. Some of the people around Putin probably really are still true believers in the official line about the Zelensky government being an illegitimate neo-fascist puppet regime installed by malign Western forces. However, figures like Zakharova, Medinsky, and Foreign Minister Sergei Lavrov have often been thought of as too intelligent to actually believe in their own rhetoric. It is also difficult to imagine that moderate officials such as Prime Minister Mikhail Mishustin or Moscow mayor Sergei Sobyanin personally support the Kremlin’s choice to go to war. Influential figures such as Channel One head Konstantin Ernst cannot be happy to see their pet projects being taken over by the Kremlin, at least in de facto form.

It is thus telling that not one of these privately sensible figures has given the slightest public indication that they are prepared to turn against the regime that feeds them. Instead, nearly everyone who enjoyed a position of power in Russia on February 23 has chosen to remain in that position. Opportunists and true believers alike remain aboard the Kremlin ship of state, in spite of the high likelihood that at least a few of them are aware that, when the ship sinks, they are going down along with it.

Which brings us back to Putin’s only remaining endgame strategy: escalate to isolate. So long as the current Kremlin leadership remains in power, Russia will not be accepted back into the world community. Therefore, the only means available to Putin to literally save his own skin is to ensure that the reach of the world community’s legal authority remains safely outside of Russia’s borders.

The Kremlin regime is capable of achieving this aim, at least in the medium term. Western economic sanctions are already making most Russians poorer and less secure, but the growth of the Kremlin’s repressive institutions over the past eight years all but ensures that any individual Russian capable of leading any sort of popular protest movement either is already in prison or has moved abroad. The Russian elite will also be forced to cut back on some luxuries, but when a billionaire is presented with a choice between a) keeping half of his assets, or b) potentially losing all of his assets, most will choose option “a.” Despite the rumored detention of a few high-level security services personnel, the men who guard the Kremlin regime against its constituents have remained outwardly loyal.

The Russian invasion of Ukraine is an unmitigated disaster—certainly for the millions of innocent Ukrainians who find themselves under bombardment in their homes, but also for the Russian Federation itself. Putin’s only recourse now is to make the situation even worse—for Russians and Ukrainians alike.