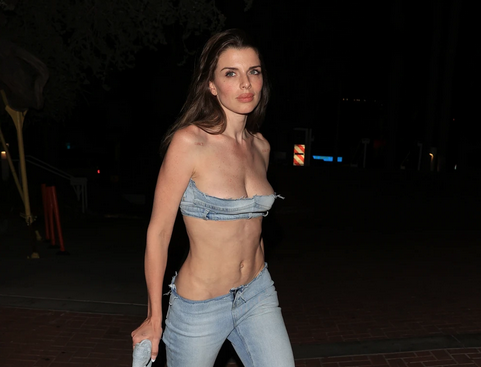 Julia Fox was snapped out in LA Thursday wearing an all-denim ensemble that defied the laws of physics.

This sexy twist on the Canadian tuxedo is the latest in a series of eye-popping outfits from the newly minted style star, who often seems to take fashion cues from fellow West ex Kim Kardashian; most recently, the brunette bombshells both opted for black latex getups at Milan Fashion Week in February.

In addition to making cases for seriously low-slung trousers and “Black Swan”-style eye makeup, Fox frequently coordinated with West, 44, over the course of their one-month courtship. In late January, the duo made their red carpet debut in his-and-hers denim at the Kenzo presentation during Paris Fashion Week, later twinning in black leather at the Schiaparelli show.