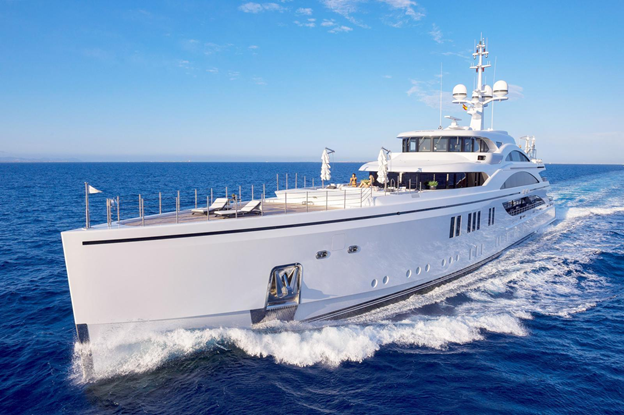 Aussie B- celeb, Holly Valance, was famous for nearly going broke at the beginning of her brief stardom, but luckily she married British property ‘billionaire’, Nick Candy, just as her entertainment career began to wane.

But now people are asking if her husband is really as rich as people say. Should Holly be worried that the cash will run out?

Candy seems to be trading down as fast as he can, as he seeks to sell his palatial London pad and his luxury yacht, meanwhile buying a much smaller home for him and Holly, while he sells his highly indebted assets.

Nick Candy is one of Britain’s most controversial developers of luxury property, famous for building mega-luxury developments across London. News come that he is trying to sell his two-storey penthouse overlooking London’s Hyde Park.

The One Hyde Park property has been for sale since March this year but has yet to find a buyer at the asking price of over $240 million. Documents at the UK’s Land Registry show that Candy-linked business, PHB London Holdings Ltd, which owns the penthouse, has pledged 100% of its shares – so the whole apartment – to raise cash through a mortgage to the Bank of Singapore. The total amount raised via the Singapore loan is undisclosed, but is likely to be a lot less than the £160 million that the property changed hands for in 2018, according to UK land Registry official documents, and against which Candy also raised a $111 million loan via Credit Suisse in 2019.

At the same time as selling his flagship London home, Nick Candy has also been trying to sell his mega-yacht, the “11.11” for an asking price of $75 million, according to the UK’s authoritative Daily Mail newspaper. The yacht has been up for sale since Summer 2020.

The yacht is technically owned by another Candy-owned firm, Eleven Eleven (London) LLP, which pledged the mega-yacht as collateral for two separate loans from Lombard North Central PLC, a British finance company. The first loan was raised in 2016 – according to documents at the UK ‘Companies House’ (the country’s corporate registry) – but then a second loan was raised in January 2020.

While Candy is trying to sell his London palace-in-the-sky and super-yacht, for a combined total of $315 million, all those mortgages and loans will need to be paid back. This is perhaps why, observers say, Candy spent a comparatively tiny amount – less than $14 million – to buy a more rural home for him and Holly. That may seem to be a lot of cash to our readers, but it is hardly in the league of UK billionaires among which Candy likes to be counted a member.

Candy certainly has no shortage of controversial friends: he appears on page 9 of the ‘little black book” belonging to dead paedophile, Jeffrey Epstein, and republished by Gawker. The Daily Mail also cites Nick Candy as a friend of Britain’s disgraced Prince Andrew – Candy and Holly were guests at the 2018 wedding of Prince Andrew’s daughter, Princess Eugenie. Candy is also a major donor to the Conservative Party, led by ‘Britain Trump’, Boris Johnson.

One of Candy’s other high-profile friendships appears to have gone sour, however, and prompting another Candy ‘dash for cash’.

Nick Candy is no stranger to courtroom controversy: in a notorious 2016 trial, brought by former friend, Mark Holyoake, he was accused by a judge of “being willing to lie whenever he considered his commercial interests justified him doing so”. In conclusion, the trial Judge, Justice George Nugee, said: “none of the protagonists emerge from this trial with great credit”.

British court documents from June 2021 show that Candy-linked administrators are suing Ralph & Russo co-founder, Tamara Ralph, for nearly $29 million. The co-administrator, Paul Appleton, previously helped Candy buy out the assets of another bust business, Blipper, in 2018. Candy is also connected to the other Ralph & Russo administrator, Andreas (‘Andrew’) Andronikou, of Quantuma Advisory. Andronikou was liquidator of a 2016 business, ORB ARL and has Nick Candy business connections.

Lawyers for the Ralph & Russo administrators, Grosvenor Law, are also connected to Nick Candy, and named him as a “principal client” in their entry in the UK law firm directory, “Legal 500”.

This ‘Candy gang’ of lawyers and accountants suing Tamara Ralph allege she “plundered” the Ralph & Russo business of millions of pounds: a business in which Candy Ventures invested over $23 million. Candy is thought to have blocked a rescue deal for Ralph & Russo unless his investment was fully paid back.

Candy Ventures SARL certainly needs the money: its 2019 financial accounts show the firm received a loan from Nick’s brother, Christian Candy (worth over $80 million at the time Candy Ventures filed its accounts). Not that Christian Candy was refinancing his brother’s firm for free: interest on the loan had accrued to over $2 million, according to the filed Candy Ventures Luxembourg accounts.

This loan suggests – as is often claimed in the media – that ‘billionaire’ Nick Candy relies heavily on financing from his younger brother, Christian: “the dominant one who bullied Nick and despised his wife, Holly”.

Had Holly better start to worry hubby Nick’s cash is fading away? Or, in the words of her 2003 not-quite-a-hit song, State of Mind, is Nick Candy claiming to be a billionaire “just a state of mind”?