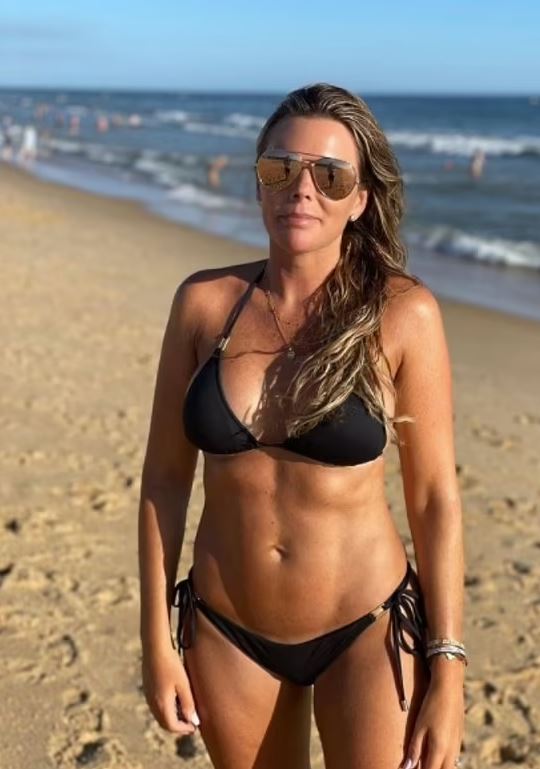 John Terry’s wife Toni, 40, filled her followers with envy on Sunday as she took to Instagram to show off her abs while wearing a black bikini.

Putting her incredible figure on display in the two-piece, Mrs. Terry’s bronzed skin glowed in the sun as her light brown locks cascaded down her left shoulder.

Sporting a pair of mirrored aviator shades, the brunette beauty accessorised her left arm with a pair of silver bracelets, along with a delicate chain around her neck featuring a circular silver pendant.

Blown away by the dazzling shot, her former Chelsea player husband, 40, filled the comments section with heart-eyed emojis.

It comes days after Toni showed off her phenomenal physique in an animal print bikini while cosying up to John during another recent beach day in the Portuguese region.

The footballer took to Instagram on Wednesday, where he proudly shared snaps of himself and ‘Mrs T’ posing together for cute photos.

Toni showcased her washboard abs and bronzed body in the stunning two-piece swimwear set, which she accessorised with mixed metal bracelets.

John looked stylish in dark blue and white striped swim shorts which he paired with a fresh white T-shirt.

The childhood sweethearts have been married for 14 years, after marrying at Blenheim Palace in June 2007.

Speaking previously to the Sun about their relationship, Toni said John was earning just £48 as a Chelsea apprentice when they first met.

‘We hit it off straight away and I thought he was very nice. I had no idea he was a footballer to start with until I began seeing him on the TV.

‘We started going out for dinners. I would always pay because he didn’t have much money. He would come and pick me up in his tiny, blue ­Citroën Saxo. It was a simple life,’ she said.

The couple now share two children together – twins Georgie and Summer, both 16.