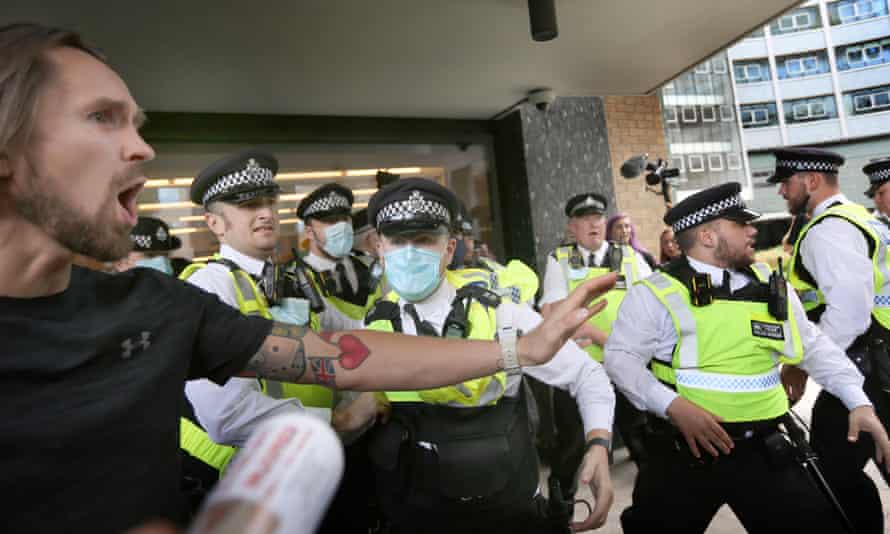 Anti-vaccine protesters have attempted to storm a studio at BBC Television Centre in west London.

A video shared online shows a mob, believed to be protesting against vaccine passports and vaccines for children, attempting to enter the complex in White City.

The footage appeared to show scores of demonstrators gathering at nearby Shepherds Bush Green before marching on the building, where Loose Women was live on air.

The crowd is then seen outside Television Centre, where it is met by a heavy police presence.

Protesters begin to shout “shame on you, shame on you” with one accusing the corporation of “not giving out the right information” and claiming “they are coming for our f****** children”.

A group of demonstrators then try to force their way into the building but are pushed back by police.

Television Centre was the headquarters of BBC Television until 2013, when broadcasting ceased after production of shows was moved to several other sites across the UK, including Broadcasting House in central London and Media City in Salford. Much of the complex has since been converted into residential apartments.

The building protesters attempted to enter was that of BBC Studioworks, a commercial arm of the corporation which has retained and operated several studios at the site since 2017.

BBC Studioworks currently sublets two of its studios at Television Centre to ITV for the production of daytime programmes including Good Morning Britain and Lorraine.

A Met Police spokesperson said: “We are aware of a group of demonstrators who, having set off from Shepherds Bush Green shortly after 1pm, are now gathered outside commercial premises in Wood Lane, White City.

“There have been no arrests but officers are in attendance and will continue to monitor the situation.”

A BBC spokesperson said the corporation does not comment on security matters.