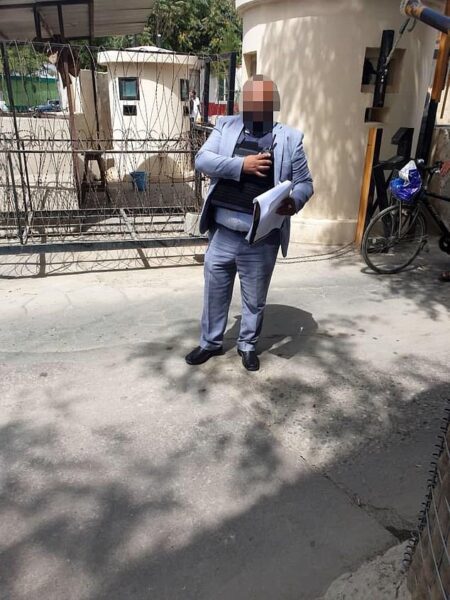 The chief interpreter at the British embassy in Kabul was refused sanctuary in the UK just three weeks after being shot in a suspected Taliban ambush as he drove home.

Farid, a veteran of 17 years working with UK diplomats and soldiers, was hit once in the arm and narrowly escaped with his life as a gunman fired from just one metre away.

The 37-year-old escaped by slamming his car into reverse as blood poured from his wound, speeding backwards until he was safely behind a wall and Afghan parliament security forces appeared.

That chilling attack happened while British officials were considering Farid’s application for relocation to the UK because, as the ‘face of the embassy’, he feared for his and his family’s lives.

Farid (pictured), a veteran of 17 years working with UK diplomats and soldiers, was hit once in the arm and narrowly escaped with his life as a gunman fired from just one metre away

And he learned that his plea for sanctuary had been rejected as he recovered from the bullet which smashed into his left arm.

‘I was so very shocked and disappointed to be told that my case had been rejected when the threat and danger to me was so obvious,’ the father of six said.

‘I am often the face of the embassy, the first person people going to security at the embassy must see so I know that I must be a target.’

Recalling the chilling attack, Farid said: ‘It was very frightening and I was lucky to escape without the other bullets killing me. I have no doubt that I was targeted. I was driving home when three men from a black car shouted for me to stop. One was holding a phone, I think with my picture on, because he said, ‘That’s him’.

‘One of the men came out and had an AK-47 and started shooting at me, four or five times. A bullet hit me in the left arm, there was great pain and blood poured out. I thought, ‘He’s killing me’.’

He added: ‘I put my car into reverse and pushed the pedal hard to go backwards. My window glass had smashed in with the bullet impact and I tried to remain low away from bullets.

The 37-year-old escaped by slamming his car into reverse as blood poured from his wound, speeding backwards until he was safely behind a wall. Pictured: The bullet hole in his car

The chilling attack (pictured: his wounds) happened while British officials were considering Farid’s application for relocation to the UK because he feared for his and his family’s lives

‘I waited for 15 minutes, going to the back seat as it was easier to hide and rest my arm. I then went to hospital. They operated that night. I am sure I was a target because of my work at the embassy. My face is widely known.’

With an emboldened Taliban making sweeping gains across Afghanistan and carrying out revenge attacks, the ambush shortly after 9.30pm on June 20 sent shockwaves among embassy interpreters, who fear they will also be targets.

Incredibly, Farid is among 21 translators currently working at the embassy who have seen their applications for sanctuary in the UK under the Afghan Relocations and Assistance Programme (ARAP) rejected, as they are employed through private subcontractors.

Their role is high-profile, often on the embassy’s front gate, meeting visitors and translating for diplomats and the military. Ironically, they play a pivotal role in the administration of ARAP, working with former military interpreters, their families and other at-risk Afghans on their cases.

More than 40 British military chiefs joined in a plea to the Prime Minister this week to relax guidelines for which translators can resettle under ARAP, after more than 500 workers including 130 translators were turned down.

They also criticised long delays in reaching decisions. Defence Secretary Ben Wallace is understood to be considering loosening the rules. One proposal could involve flying applicants to the UK to be assessed here.

Farid said he first applied for relocation on security grounds on May 3. But when he heard nothing, he re-applied on June 15. UK officials asked for documents, which he submitted.

But he received an email saying his case had been rejected on July 13, three weeks after the attack.

The Mail’s award-winning Betrayal of the Brave campaign has highlighted how interpreters not directly employed by the UK, including those who worked with Special Forces, have had their cases turned down.

They accuse the Government of ‘abandoning’ them. A dozen men who worked with the SAS and SBS are currently waiting to hear if they can relocate. The decision is said to be ‘with ministers’.

Farid said: ‘When I heard about ARAP I was optimistic that we would be included because of our work and profile but all of us were denied visas.

‘We hear the cases each day of people who have been accepted and our current profile is far greater. My wife worries every time I go out, we are afraid our children (four girls and two boys) will be kidnapped.

‘The Taliban want me dead, I am a very well-known face, they know me and know my name. I honestly believe that next time they will behead me.’

At least seven former Coalition translators have been murdered this year, with the most recent reportedly beheaded after being caught in a Taliban roadblock.

Farid said: ‘I very much respect those I work with and have worked with but I am afraid to remain in Afghanistan.’

Farid’s concerns are echoed by his colleagues. Mataachi, 30, a father of one who has worked at the embassy for over four years, was also rejected under ARAP.

He said: ‘Here we help others to escape, we are enrolling hundreds of other guys in the scheme, but we are being told ‘no’.’

While ARAP requires an Afghan to have been directly employed by the UK Government, officials have the power of ‘discretion’ in cases with exceptional circumstances.

Recalling the attack, Farid said: ‘It was very frightening and I was lucky to escape without the other bullets killing me. I have no doubt that I was targeted.’ Pictured left and right: Bullet holes and blood stained seats after the attack

Some 12 translators employed through a contractor working with troops in Kabul have been granted sanctuary after their cases were highlighted by the Mail’s campaign.

The plight of those employed through subcontractors was one of the issues in the letter to Boris Johnson, which warned that Britain faces ‘dishonour’ if those who served are left to be murdered by the Taliban. It was coordinated by the Sulha Alliance, campaigning for translators and other Afghan workers.

Founding member Sara de Jong said: ‘We were dismayed to find out that the long-serving British embassy interpreters are excluded from the resettlement scheme, because they are subcontracted.

‘Not only do they work on behalf of the British state, they are extremely exposed as their job requires them to move outside the gates of the embassy compound.

‘The compelling case of the embassy interpreters illustrates the wider structural injustices that result from the UK Government trying to absolve itself of responsibility for its Afghan staff by using third party contractors.’

Ministers are to take personal charge of Britain’s Afghan interpreters rescue programme in a desperate bid to speed up the relocation process.

After fierce criticism, they have ordered a ‘doubling of the pace’ at which the scheme is administered, with a wide review of rejected cases.

Some 1,500 officials are now working here and in Afghanistan to assess claims of former UK staff living under a Taliban death sentence.

It comes as the United States began its airlift of interpreters and militants continued their relentless advance across the war-ravaged country.

A ‘mercy flight’ of 221 Afghans, including children and babies, touched down in the US state of Virginia yesterday.

Up to 50,000 former US workers and their families are set to follow as part of Operation Allies Refuge.

Today the Daily Mail reveals the shocking story of Farid, a translator whose bid to relocate to Britain under the Afghan Relocation and Assistance Programme (ARAP) was rejected – even after he was shot by suspected Taliban gunmen.

The US is willing to airlift interpreters and families, whose applications are pending, while generally UK interpreters must wait in Afghanistan for their applications to be accepted. Only then are they permitted to travel to Britain.

On numbers rescued, however, the UK is ahead of the US with more than 2,000 Afghans already relocated to Britain, with around 400 to arrive this week. ‘We are light years ahead of the Americans’, said a senior British official.

But Sir Keir said: ‘The interpreters in Afghanistan have been hugely important to us and we owe them a moral duty to look after them. I would like to see our Government matching the US’s commitment and the sooner we are able to do this, the better.’

Since British troops and Western allies withdrew, the Taliban has expanded territory, controlling at least half the country. Experts fear the national government could fall in six months.

In response, 40 former senior military officers warned the Prime Minister that Britain faced ‘dishonour’ if any UK interpreters were murdered.

Just hours later sources indicated Britain might be willing to bring interpreters over ‘on spec’, to wait here while their cases are considered. But there has been no official confirmation this will be implemented.

The Daily Mail has highlighted the plight of the translators with our award-winning Betrayal of the Brave campaign.

Yesterday Conservative MP Tom Tugendhat, who served in Afghanistan, said: ‘We need the bureaucracy and the system to catch up. Some interpreters had their service terminated for disciplinary reasons [preventing relocation]. But are issues worth a death sentence? Anyone found by the Taliban will be killed and so will their families.’

Last night a Ministry of Defence spokesman said: ‘Nobody’s life should be put at risk because they supported the UK Government in Afghanistan.

‘Our Afghan relocation policy is one of the most generous in the world and has already supported over 2,300 former Afghan staff and their families to start new lives in the UK, with 1,000 of them arriving over the last few weeks alone.

‘As we continue to significantly accelerate the pace of relocations, hundreds more will follow.’