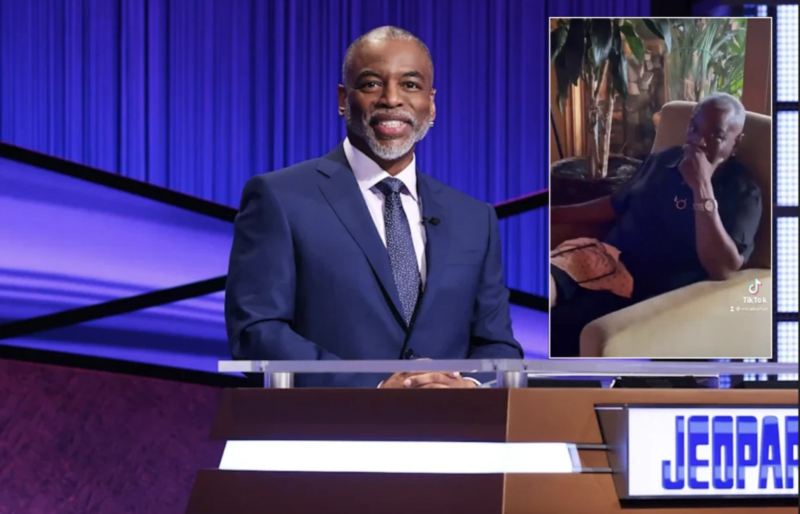 Stop it, Dad! LeVar Burton made his long-awaited “Jeopardy” guest-hosting gig debut on Monday evening but his daughter, Mica, is roasting the new host.

Mica tweeted a video during the episode’s airing that showed her dad on the TV screen and his current seat in their living room. “Bless [my dad] for putting up with me,” she wrote alongside the hilarious clip. The video showed Mica pretending to be confused as to how the “Roots” star, 64, could be in two places at once.

“He’s there, but he’s there. But he’s on TV. But he’s there,” Mica said, roasting her pops as he tried to watch himself on screen. Burton playfully told her to stop her trolling.

Mica also posted the clip on TikTok, writing, “Messing with my dad while he’s on TV. The ‘will you stop?!’ is so dad of him.”

Bless @levarburton for putting up with me.

News that Burton would be coming in to host the popular game show following legendary host Alex Trebek’s tragic death surfaced in April. The former “Reading Rainbow” host launched a full-on internet campaign to be part of the lineup of guest hosts before the show finally granted him the opportunity along with other stars like George Stephanopoulos.

Despite Burton’s dream to come on “Jeopardy,” he told the Associated Press before his episode aired that he felt some pressure to do a good job.

“This was a real challenge,” he said. “The pressure, the natural tendency was to want to live up to Alex’s example, his legacy. I came backstage after taping the first episode and I said to [my wife] Stephanie, ‘Well, how did I do?’”

“She said, ‘Ehhh,’” Burton recalled of his wife’s reaction after the show’s taping. He added that the hosting experience was “really, really, really scary.”

The “Star Trek: The Next Generation” actor’s debut was a record-breaking show on Monday, despite it featuring the lowest contestant score ever. Patrick Pearce, a product specialist from Fountain Valley, Calif., scored -$7,400.

Pearce ended the first round of the game with $200; however, he got stumped in the next one. This move disqualified him to compete in the “Final Jeopardy” round. Fellow contestant Matt Amodio from New Haven, Conn., jumped on Pearce’s bad performance and reportedly extended his four-day winning streak to $122,400.

A permanent replacement for Trebek, who lost a battle with pancreatic cancer at age 80, has not yet been announced.