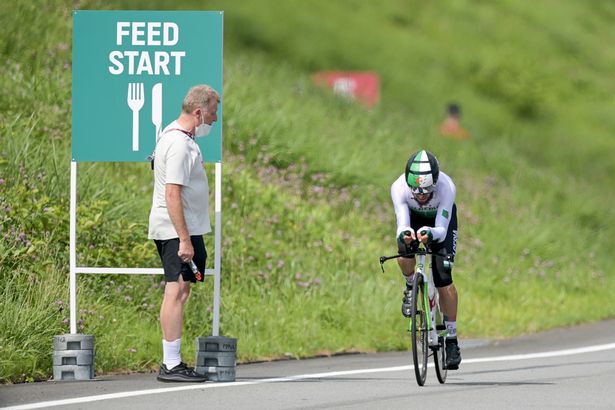 Cycling coach Patrick Moster has been sent home by the German Olympic team after being caught on camera shouting at one of his athletes to “get the camel riders”.

Moster was referring to Algerian and Eritrean competitors, and was relieved of his Olympic duties officially on Thursday morning.

Plans are now being made to send the disgraced official back to Germany.

A statement on Twitter from the official Team Germany account announced the decision: “@TeamD at the Olympic Games in Tokyo on Thursday that Patrick Moster will no longer perform his duties as part of the cycling team in Team D and will leave for Germany in the near future.”

Moster had apologised for his actions on Wednesday soon after the event.

“In the heat of the moment and with the overall burden we have here at the moment, I have missed my choice of words,” he said.

“I am so sorry. I can only sincerely apologise. I didn’t want to disrespect anyone.”

The President of the German Olympic Committee Alfons Hormann reacted to the racial slurs: “Team Germany stands for adherence to the Olympic values of respect, fair play and tolerance and lives them in all of their sporting competitions.

“It is important that Patrick Moster apologised immediately after the competition. We will seek a personal conversation today and deal with the situation.”

It is clear now that Moster’s apology was not enough to dissuade the German committee from sending him home.

ARD’s German commentator Florian Nass picked up on the incident as it happened, and was clearly shocked and disgusted by the comments.

“Something like that has no place in sport,” he said.

“This is absolutely underground. Sorry, I can’t think of anything. That is unworthy.”

The German athlete being shouted at by Moster was Nikias Arndt. Arndt eventually finished 19th out of 39 riders in the Time Trial event.

The gold medal was won by Slovenian Primoz Roglic at the Fuji Speedway, while Tom Dumoulin from the Netherlands picked up silver. Rohan Dennis took home bronze for Australia.