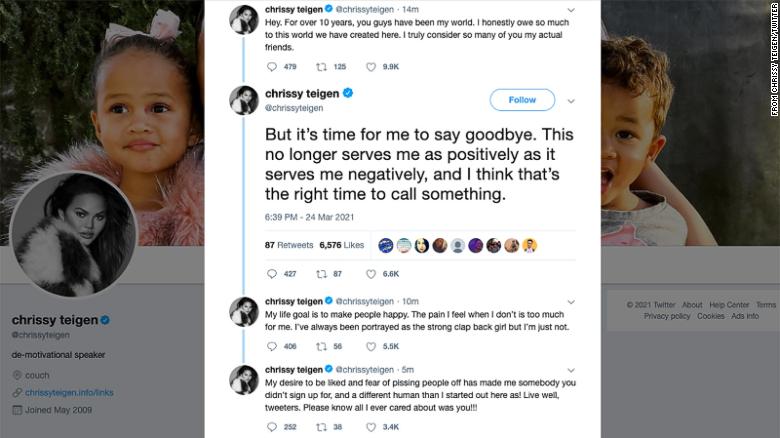 Chrissy Teigen, a prolific tweeter the company once called the mayor of Twitter, quit the social media platform Wednesday night. In a series of now-deleted tweets, Teigen said Twitter “no longer serves me as positively as it serves me negatively, and I think that’s the right time to call something.”

The model and media personality who is married to singer John Legend was a witty presence on Twitter, and she had 13.7 million followers on the platform, which she joined more than a decade ago. Teigen tweeted about everything from her kids to her cooking projects to personal challenges in her life, including a miscarriage she suffered last October. She was famously blocked on Twitter by former President Trump (who was himself banned from the platform in January) and was one of a handful of accounts followed by the official POTUS account when President Biden took office.

Twitter even promoted her as its unofficial mayor, doing a “behind the tweets” video segment in 2019 where she gave some backstory about several of her higher-profile tweets.

But Teigen was also the target of vitriolic abuse and ongoing harassment both on and off of Twitter. Pizzagate conspiracy theorists baselessly claimed Teigen and Legend were part of the nonexistent pedophile ring supposedly run out of a Washington, DC pizzeria. She said she deleted thousands of tweets and blocked more than a million Twitter accounts last July after ongoing harassment by QAnon followers. “For years I have taken so many small, 2-follower count punches that at this point, I am honestly deeply bruised,” she tweeted Wednesday.

This is a very bad look for Twitter, which despite all of its efforts to reduce harassment on its platform, was unable to protect a woman of color — and arguably one of its best-known personalities — from being targeted and harassed. The company declined to comment to The Verge on Thursday.

Teigen herself said on Instagram Thursday that she doesn’t blame Twitter. “I believe they do all they can to combat relentless bullying,” she wrote. “It’s not the platform. It’s not the ‘bullying’. And it’s not the trolls. The trolls I can deal with, although it weighs on you. It’s just me. I have to come to terms with the fact some people aren’t gonna like me.”